You are here: Home1 / ham Singapore 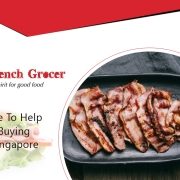 Whether you are planning to organize a dinner on any special event or planning for a big family gathering, nothing can please the guests or are easier to make than a baked ham. As hams are available fully cooked, the heavy lifting has already been done. All you have to do is to warm up the ham, slice, and then serve. But here the most complicated part is shopping for the ham. So, to help you out, in this blog, we are offering a guide on choosing the best quality ham.

But before that, let’s get some details about hams.

As the most basic, ham is the hind leg of pork. But this definition is not enough to tell you whether this meat is brine-cured, salt-cured, air-dried, smoked, cooked, aged, or some combination of all these things. It is possible to prepare ham in several ways. For instance, for Easter ham, you would need one, which is cured with brine, smoked, and then fully cooked. They are known as city hams. They are different from the uncooked country hams, which are mainly cured by directly rubbing the meat with sugar and salt. The city hams are the commonest variant of hams that you can find in the supermarkets.

Now let’s have a look at the guide to buying ham Singapore from supermarkets.

 Cost: If you find great prices when buying ham, just stop there. Remember, often hams have some additional water injected during their curing process. So, either choose ham with natural juices or meat labeled ham from the supermarket. Stay away from the ham and water product and ham with added water. Here you will be paying for the additional weight of water and in turn, you will receive spongy and bland meat.

 Cure: Hams are of three types, fresh (uncured), country (dry-cured), and city (wet- cured). Among all the variants, city ham is the most popular variant and it is available fully cooked. So, you can buy it and then can serve it warmed (to 140°) or cold. In case the city ham is uncooked, then bake that to 145° and then rest it for around 3 minutes before serving.

 Cut: The whole ham can serve 30. This is why most people choose to buy half of the ham. The shank end comes with the classic ham look where the butt includes more usable meat. If you are buying it for the first time, then we would recommend getting bone-in. It has a better texture and flavor.

 Carve: Although purists often disagree, most of the users prefer the ease offered by the spiral-sliced ham. When you bake this ham over water by covering it in foil, it will not dry out. The majority of the spiral-sliced hams are available glazed, so if you are planning to prepare a specialized recipe, then you should purchase a naked ham.

What is the difference between ham and gammon?

Both Gammon ham Singapore and ham are some delectable cuts of pork (hind legs of pig), which are highly versatile and can be enjoyed in different recipes. For instance, they are brined, salted, or smoked. Brining keeps the meat moist for a longer time, salting helps to preserve food by drawing out the moisture, and many smoking techniques maintain the quality of the ham. For instance, hot smoking adds flavor during cooking and cold smoking adds flavors before cooking. Besides, both of them are prepared similarly. One thing that differentiates gammon ham from ham is that the former is sold raw by the local butchers in the local supermarkets. So, it needs cooking before you can serve it. But ham is ready to eat.